GRASSES FOR TERRACE IN POT

GRASSES IN OUR GARDENS AND PARK

In natural vegetation grasses play an important role. Why not in our gardens and parks? It is the combination of flowering and foliage plants with grasses provides a natural atmospheric image of a planting. Moreover grasses add much to a garden: the typical inflorescence is of many species in the late summer and can last until the beginning of winter. The winter picture with perennial flowering panicles enlivens a yard even the dead of winter. Grasses ask minimal maintenance. The species of evergreen are not after the winter season (March) cut just above the ground. The new growth resumed in the course of the spring. Evergreen grasses and deciduous sometimes require some maintenance pruning and removal of old leafs. Regarding nutrition and rank grasses have generally prefer open, sunny site with a moderate moist soil and little fertilizer to grow a strong plant.

Botanically speaking, the group (ornamental) grasses is part of the Poacaea family. Practically speaking, from the viewpoint of the garden design, I choose a broader definition where other grasses and grass look-a-likes are included like Acorus (sweet flag), Carex (sedge), Equisetum (horse tail) Luzula, Ophiopogon (snake beard), Liriope (monkey puzzle grass), Juncus etc. Although bamboo, such as Fargesia and Phyllostachys strictly speaking, to the botanical definition belong to this group, it’s the better to separate them in the menu.

It is a profession to design a well-balanced planting with the application of grass-like species in combination with other plants. We can provide you support in the form of making a planting and / or garden design. The available grasses range for landscaping is still in development. I regularly get new species with a value-added to the existing range. By fellow breeders, collectors and from imported new species planted out and observed in our trail garden. Suitable species will eventually be added to the nursery stock. In the showgarden many adult species can be found. In our production field many types are available during the growing season for sale.

Ornamental grasses and grasses can be divided in various ways for use in gardening and landscaping. Depending on the situation, the selection criteria are:

1 Size. Low, medium and high in the planting schedule. Plant height information from literature, however, is often indicative. The actual height is also depending on the soil type, moisture availability and the microclimate of the plant location. The amount of sunshine and temperature in a growing season also affects the results annually. This may, in practice, result in differences of height and volume of the plantings. Also, the age of the plant plays a role. Some grasses have their optimum between 2-5 years, after which they begin to lose their compact shape and rejuvenation advisable. Others may remain in place for over 10 years without losing quality.

2. Winter structure. In winter, evergreen or deciduous species. Sometimes it is the desire to apply only evergreen ornamental grasses. Although only about a quarter of the species are evergreen and are relatively low, we can still build beautifully varied gardens this. Within deciduous species we select species with a beautiful winter silhouette of dried culms and plumes.

4. Plant spot. Another practical criterion is the location in the garden. Soil quality (degree of moisture, drainage and nutritional value), can be manually adjusted, but the quantity of light is more difficult. Since most ornamental grasses sun-loving species, the choice is limited for shady places, but suitable species can be found in Luzula, Carex, Liriope, Millium, Hackenochloa. More light needy species such as Miscanthus and Cortaderia can grow in a shady place, although they are not likely to bloom and are often hanging. In partial shade (localities with a portion of the day sun and under open tree crowns) more is possible; Ophiopogon, Panicum, Pennisetum, Stipa usually succeed. In full sun almost all kinds do well, even the shade tolerant species, if provided with sufficient moisture.

5. Clumping and spreading. Finally, there is still to distinguish between species which always remain in their place or start spreading, the clumping species and species that create a greater or lesser extent root suckers, the parasitic species. The vast majority of the ornamental grasses and herbaceous is clumping and therefore can be used without any additional measures, in the majority of situations. A limited number of species makes root suckers. Sometimes this is desirable, for example, at a low, ground cover types. 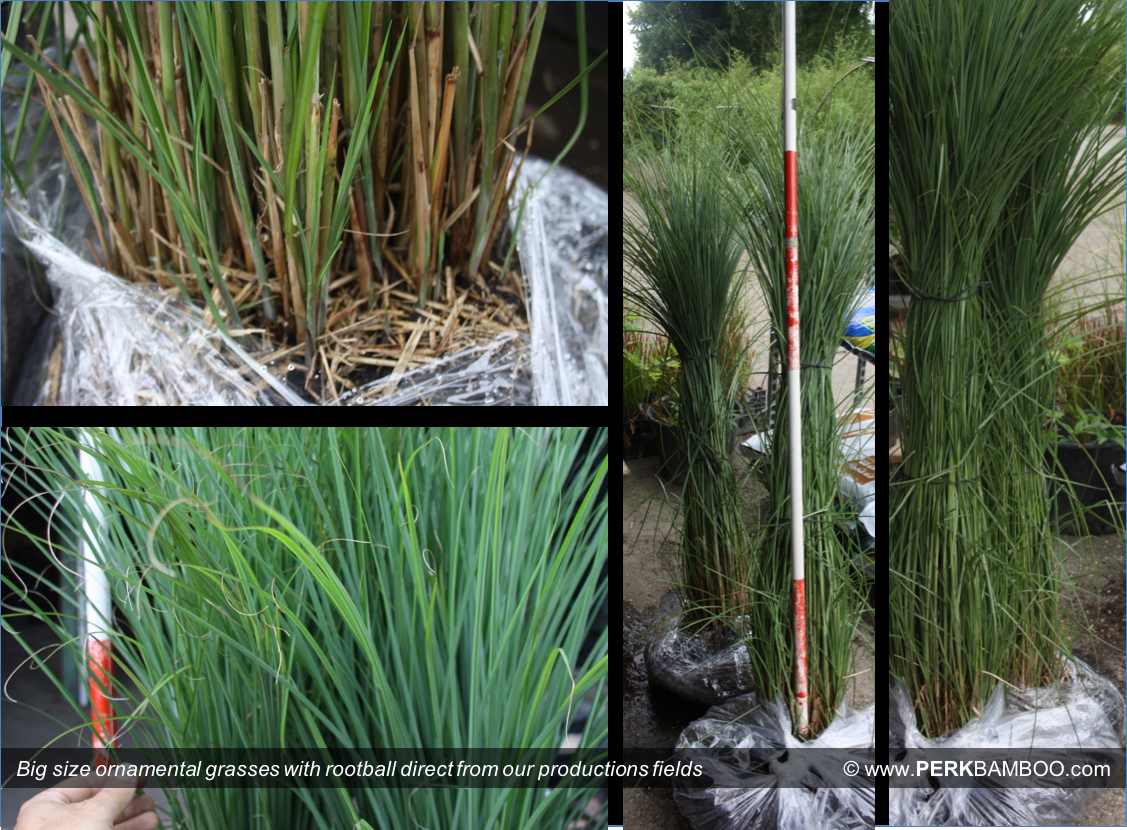