Gingers and Canna's add an exotic summer touch to any garden. Most awake from winter hibernation when temperatures are seriously increasing to 15-20 degrees C. In our climate growth starts somewhere in May or June and continues until the first winter frosts. Although not always necessary, we prefer to cover our plants in the garden with a winter mulch layer. Most species prefer an organic, nutrient-rich topsoil. Many tolerate full sun, although most prefer semi-shade.

Note: some species are rare and only available in small quantities, others might be still under observation. Availability differs annually.

Regarding Canna my interest goes out to the strongest botanical species and forms with small flowers and an attractive foliage shape / color and habitus. Sometimes large-flowered cultivars are also available like Canna 'Cleopatra', Canna ‘Pretoria’ and ‘Durban’. Annually a number of the species described below are in stock. We only use our own plant material because of the Canna virus which is roaming around in trade.

Canna altensteinii is a relatively unknown but strong botanical species from the colder mountainous regions of the Andes. This may explain its good growth in our climate. Typically are the relatively wide leaves. Altensteinii grows over 2 meters and is in the summer adorned with numerous delicate peach colored flowers. In late summer flowers are followed by large fruits, filled with black seeds, the size of peppercorns. This Canna makes thick rhizomes and can form a nice clump. We have this species since 2004 successfully in our garden with a protective mulch layer during cold winter over the root system.

Canna (glauca) annaei 'Omega' is an improvement of Canna ‘Heliconifolia’ and grows upto 2 m high. Notable are the large blue-green leaves and apricot botanical flowers. Seed pods are formed in late summer. The flowering period is from mid-August until frost. With a winter-mulch layer this is one of the few Canna species we have in our garden for many years. The white variegated sport is known as Canna (glauca) ‘Stuttgart' and is sometimes also in stock. 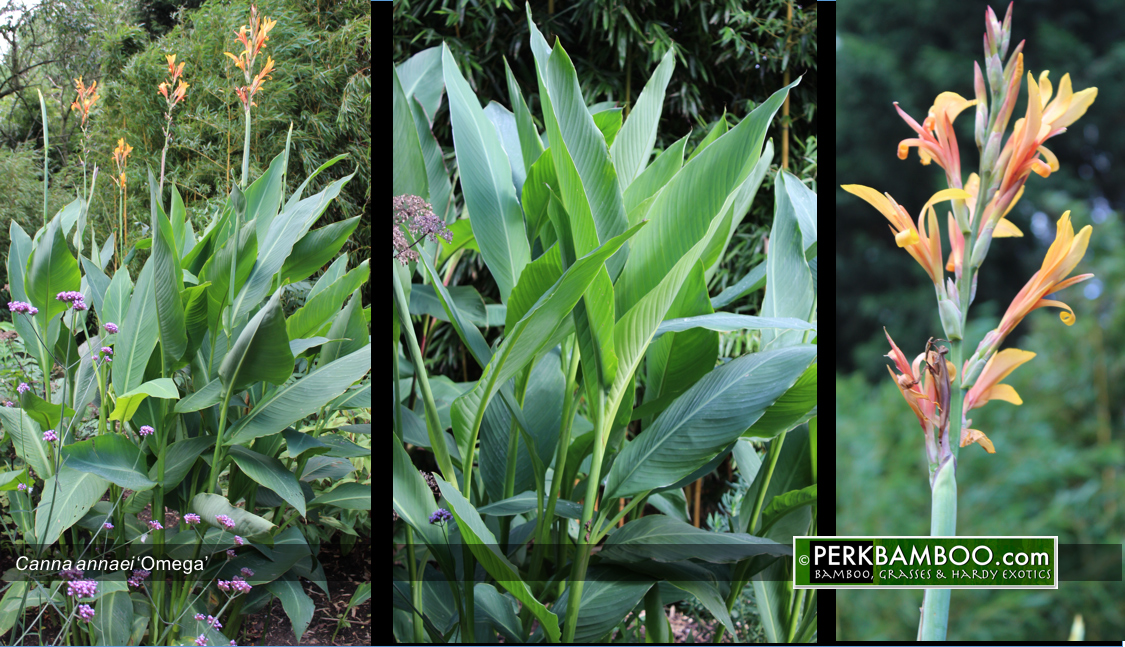 Canna hybrid 'Russian Red' is a valuable structure plant with large purple-red leaves. The young leaves are dark green with red veins which quickly turn into red and grows to about 2 meters. In late summer it flowers with little red flowers. This species grows already several years successfully in our garden with a mulch layer in winter over the root system. Canna hybrid ‘Robert Kemp’ is a green form of the same type of hybrid. ‘Robert Kemp’ also grows in our garden for many years succesfully. 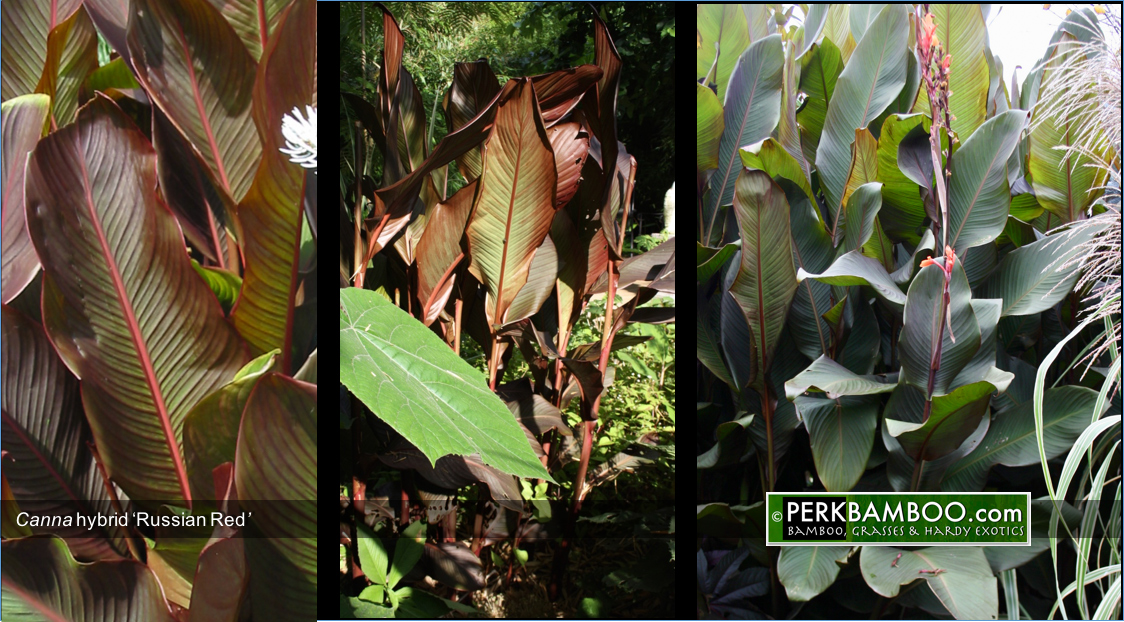 Canna iridiflora 'Ehemanii' is for me one of the most impressive Canna’s. This form has very large leaves which reminiscent in shape of Heliconia. It flowers with pink red hanging bells. With a good winter cover it is possible to overwinter outside but to be sure I also hold a number of plants out of the frost.

Canna musifolia 'Grande' (banana-canna) is a spectacular foliage plant with the leaf size and vigor of a banana. Probably the biggest in its kind, upto 4m high, with large deep-green leaves with purple edge, thick purple stems and enormous vigor. Plant it out in spring, and dig out in late fall after the first frosts. Overwinter frost-free, cool and relatively dry. Canna awakes from hibernation in May-June. Grows best in a warm, sunny spot in a nutritious, humus-rich, moist soil.

Canna tuerckheimii Kraenzl. is one of the largest wild species, to 2.5 to 3.5 m high and grows in the South American Andes up to about 2,000 m. This also explains the good growth in a cool climate. The long stems have large banana-like leaves and carry during late summer red flowers which are followed by (fertile) seed pods. We have derived our plant from an original botanical collection. New rare species; in observation.

Gingers have lush foliage, striking flowers and often sweet fragrance. Our species originate from relatively cold areas or high altitude in mountains of Asia. An indication that they have no problem with cooler temperate climates. Most gingers prefer humus-rich, moist but well-drained soil in full sun, or semi / dappled shade. The flowering time is, depending on the species, between July and November. Gingers awake from hibernation in May-June. Mulch during persistent frost.

Alpinia japonica is a low ginger with relatively large spoon-shaped leaves which stays green up to about -8 to -10 in winter. If it gets colder the above ground parts dies but the plant regrowths next summer. We didn’t notice any flowering yet.

Cautleya spicata 'Robusta' is a slim ornamental ginger from Japan and China and one of the hardest ginger species. Also notable are the wine red petioles. Height 75-125 cm. The inflorescence in late summer is absolutely beautiful. The scarlet spadix has orange-yellow flowers. This provides a beautiful color contrast. A species with a preference for partial shade on an organic, nutrient-rich soil. Slowly is forms a solid clump. The flowering period is late August - September - October. Usually available

Cautleya lutea Bream (gracilis) is a beautiful, strong ornamental ginger from Japan and China and an easy grower. Height 50-65 cm. The rich flowering in late summer is definitely an eye-catching appearance. The green conical spadix appear numerous soft yellow flowers. This species prduces also fruit with seeds. It is typically a species with a preference for partial shade.

Cautleya cathcartii is an interesting new species with a purple leaf underside and orange-yellow flowers in a deep red spadix. The compact, upright growth habit makes this species particularly attractive. A winter cover is recommended. Rare. A few other Cautleya species are under observation

Hedychium coronarium ‘Chrysoleucum'. Hedychium means "sweet snow" and refers to the snow white and fragrant flowers. H.coronarium belongs to the group of Butterly Gingers because the shape of flowers reminiscent little butterflies. It is one of the finest gingers with pristine white flowers in late summer to late autumn with a delicious fragrances (lemon-ginger). The oval leaf is on solid green stalks with a growing height of 1.5m. They prefer humus-rich, moist but well drained soil at a site in full sun to partial shade. The bloom is depending on the heat summer, between August and November. Maybe better as conservatory plant.

Hedychium forrestii Hort.
A particularly interesting and probably largest ginger for permanent outdoor cultivation. This hardy species grows up to 2+ meters tall, blooms in the (late) summer with scattered white flowers, which are followed in the autumn by beautiful red fruits. Also notable is the lush growth, large leaves and floriferous. In smaller gardens forrestii can be used as an alternative to a banana. Limited stock. Best to pre-order

Hedychium greenii is perhaps the most beautiful Hedychium in leaf and flower color with glossy dark green leaves, which are wine red at the backside. The large flowers are bright red. H. greenii is about 120 cm high. This species produces "keiki's (breeding plants) in the faded flower bud. During winter this species requires more protection than other species; Just to be sure, overwinter a part indoors frost-free.

Hedychium rubrum is also under observation; although not the hardiest but it is one of the nicest. The leaves are dark green and the inflorescence is purple-red with deep red flowers. Annually some plants are available for sale.

Hedychium stenopethalum is the biggest of all is Hedychiums. Needs a long summer to grow to mature size. In mid-2019 a limited stock of plants will become available of this species.

Hedychium spicatum has a large natural range from Kumaun to the west of Nepal east to Guizhou in China and inevitably varies somewhat in character across its range. It is one of the hardiest and very useful garden ginger. In India the fragrant rhizomes of Hedychium spicatum are burned as incense and an essential oil derived from the rhizomes is used in perfumery but also has antibiotic properties.
Hedychium spicatum ‘Dudh Kosi Valley’ reaches a height of 1.5-2 meters or higher and forms long ears with tightly spaced soft peach colored flowers. It has a sturdy, upright habit with long bunches of tightly spaced soft peach colored flowers.
Hedychium spicatum ‘Purpurea’ we have received 15 years ago from North Indian import. This plant has leaves with a wine-red underside and a dark green top. The inflorescence is more white. This form has similarities with the type Crug Farm has collected under the name 'Singalila BSWJ2303’. It grows 1-1.4 m high and is in our garden since 2003.
Hedychium spicatum ‘Salween Valley' is a smaller (1 m), well-flowering form which is usually available at our nursery shop.

Hedychium wardii is a new species with relatively narrow leaves. It flowers with a bright yellow inflorescence. In observation.

Roscoea (Tibet ginger or ginger orchid) are the smallest type of gingers (15-80 cm). The flower of this member from the ginger family is reminiscent of irises and orchids. The flower consists of helmet-shaped upper crown, a lip with wide slip and two narrow petals. The lance-shaped leaves grow upright. Roscoea can be used in groups, in combination with other gingers, ornamental grasses and ground covers.
Roscoea purpurea is according to many visitors one of the most beautiful species with purple-red stems and lila-purple flowers. Within purpurea we have several selections each with their own characteristics. Every few years we propagate 'Dalai Lama’, the bigger ‘Peacock Eye’ and sometimes the rare form ‘Spice Island’, maybe the most beautiful one with red leaves turning deep green in summer, the underside and stem remain red.

Thalia dealbata (hardy canna, alligator flag), a native from the southeastern United States, is a maverick within the ginger species. This moisture-loving plant can, including inflorescence reach 2+ meters. The broad lance-shaped leaves have an orange-red leaf margin, on a thin leaf stalk. In full sun the plant hows a beautiful blue-white haze. The leaf resembles the famous bird of paradise plant (Strelizia reginae). The blue-violet flowers go far above the leaves. We cultivate Thalia since 1995 and it has survived all winters, using a mulch layer during severe frost. It is a sturdy, stylistic plant. A more sensitive species is Thalia geniculata.

Zingiber mioga is an easy to grow ginger from Japan with a nice leaf structure. It grows upto about 50-80 cm high. Curiously, the yellow inflorescence appears at the end of summer direct from the ground. The chocolate brown flower buds are harvested in Japan as a delicacy. Very hardy. There is also a variegated form ‘Dancing Crane’. This variegated variety is for the leaf effect very rewarding and sometimes available at the nursery.